The collaborative project between Derby University and Unexamined Lives was officially launched at an event at Derby University yesterday. The launch was reported in the Derby Telegraph (click image below). 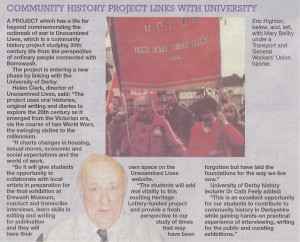 Students, staff and Unexamined Lives team members met to discuss the opportunities offered by working with the project..

The event was hosted by Dr. Cath Feely of the University History department and introduced by Helen Clark, Project Director of Unexamined Lives.

Regular contributor Chrissie Hall described a house history project that she is working on which would benefit from input from the students.