Edwin was awarded the Distinguished Conduct Medal (see below) in September 1915. However, he was killed before he was presented with it. It was presented to his wife later in February 1917.

Edwin was awarded the DCM at the Battle of Hooge in August 1915. The citation, published in the London Gazette is as follows:

For conspicuous gallantry and resource on 9th August 1915, at Hooge, when he continually went across the open repairing telephone wires under a very heavy shell fire, thus keeping up communication with his company for the whole day. He displayed great coolness and bravery, and was of the greatest assistance. (15.9.15)

Unfortunately, he was killed before he was able to collect the medal, It was finally presented to his wife Clara Emily (nee Edmonds) on 6th February, 1917. 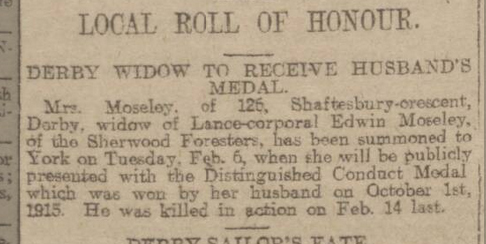